Share a memory
Obituary & Services
Tribute Wall
Read more about the life story of Justine and share your memory.

Justine Andrea Lee Burnett, PhD, 34, together with her unborn daughter, Maleah Julianne Burnett, entered eternity on Saturday, November 26, 2022, in Morgantown, West Virginia.  She was beloved by many, given her exceptional ability to connect with people. With her quintessential laugh and oftentimes mischievous facial expressions, no one could tell a story like Justine. Her unique ability to make a meaningful connection with people from all walks of life made the people Justine loved truly know and feel how much she loved them.

She was born Justine Andrea Lee in Georgetown, Guyana, June 6, 1988, and was third of four children from what would become a 29-year marriage between Ruth Philippa Lee née Haynes from Chapel Street Lodge, Georgetown, Guyana, and Ephraim Brindsley Lee from LaGrange, West Bank Demerara, Guyana. In a house of four children with names all beginning with “J,” Justine would make the most fun of our mother when she would say, “Joel, Joanna, Justine or Jasmine when she really meant to get the attention of just one child.

From childhood, Justine was the “firecracker” of the Lee family. Even when her older siblings were about to get married, people would ask, “did Justine approve?” Everyone knew how fiercely Justine would protect her loved ones. As God ordained, Justine found a sister in Altia, Joel’s wife, and a brother in David, Joanna’s husband. Justine showed her excitement about being an aunt for every birth, milestone and life event of her nephews, Josiah, Jonathan and William and her nieces, Jenae and Olivia.  You could tell hearing, “Aunty Justine” made her happy.

As the daughter of a pastor, Justine became the “little sister,” “daughter,” and lifelong friend of many church members such as the Massiahs from First Assembly of God as well as the Jones Family and the Rameswars from Bel- Air Assembly of God in Guyana. As a little girl, Justine attended Starter’s Nursery School where she quickly showed an affinity for public speaking. Her seeming natural compatibility for elocution prompted her primary school, St. Margaret’s, to select Justine to compete in the Guyana Music Festival when she was about five years old. Justine’s splendid recitation of the “Flattered Flying Fish” by E.V. Rue earned her First Prize and began a vast catalogue of prizes, accomplishments, and achievements over 34 years of a beautiful life.

Justine’s success at Common Entrance earned her a place at the preeminent Bishops’ High School in Guyana, where she was involved in several co-curricular activities, including impromptu speech, elocution and drama competitions for her house, Baskett House. Many of the close friendships that commenced at Bishops’ remain today, which is a testament of how much Justine valued the relationships she made.

After graduating high school, Justine entered the world of work in the banking and finance industry where she rose through the ranks to Assistant Manager. This was accomplished while she earned a Diploma and Bachelor of Social Science degree in Public Management at the University of Guyana. While at the peak of her banking career in Guyana, Justine was recruited by Dr. Michelle Foster to attend West Virginia State University at Institute, West Virginia, where she received various scholarships and was Chapter President of Alpha Kappa Psi - Psi Gamma.

While earning her Master of Public Administration degree, Justine quickly found a church home at Ferguson Memorial Baptist Church. Under the leadership of Rev. Dr. E.A. Heyliger and counsel of Deacon Philip Heyliger, Justine dedicated her life to the Lord and was baptized.

Justine’s academic prowess then earned her a place at the Higher Education Doctoral Program at West Virginia University in Morgantown, West Virginia. While at WVU, Justine answered the call to be in “Service to all Mankind” and became a member of Alpha Kappa Alpha Sorority, Incorporated (R), Gamma Chi Omega Chapter. Following her passion and commitment to public service, Justine held several leadership positions, including Executive Committee Member, Program Committee Chair and Vice President.

Justine also found a best friend and sister in Dr. Azalea Hulbert at WVU. Their relationship moved from being work colleagues to having a standing Tuesday night burger and drinks night with Azalea’s husband, Ryan, and  son, Benjamin. Justine would sing the theme song to the PJ Masks to Ben sometimes, just as she would sing to her nephews, Jonathan and William.

The legacy of beautiful relationships Justine cultivated over the years culminated when Justine married the love of her life, Michael Burnett, of Liliendaal, Guyana, in Morgantown, West Virginia, surrounded by family and very close friends. Everyone could tell that Justine saw greatness in Michael. A handwritten note from Justine that Michael recently found aptly described why Justine loved Michael. Justine wrote Michael’s number one quality as honest, and enumerated several other characteristics including hardworking, family-oriented and spiritual. There is no doubt that Michael and Justine unconditionally love each other. His warm mother, Ms. Joy, his accepting siblings, Anthony, Deon and Darryl and other welcoming family members, Jamela, Joshua, Rawl, and Emmanuel, made Justine feel blessed to be a “Burnett”.

A few months before their first wedding anniversary, Justine successfully defended her dissertation. While celebrating her PhD graduation, she and Michael learned that they were going to be parents, beginning a new chapter in their love story.

While the details of the next chapter of Justine’s life continues in eternity, we are comforted in knowing that she was not alone on November 26, 2022 as she changed from mortal to immortality. Justine entered heaven with her unborn daughter, Maleah Julianne Burnett. Justine would share several stories of how “Lily” would enjoy plantain and leapt for joy whenever she heard Michael’s voice.

Justine’s life was a beautiful story showing the favor and faithfulness of God. We are forever grateful for the 34 years the Lord gave her to us. Her family, friends and all who truly knew her have beautiful memories to last us all until we each see her again.

To send flowers to the family or plant a tree in memory of Justine Andrea Lee Burnett, PhD, please visit our floral store. 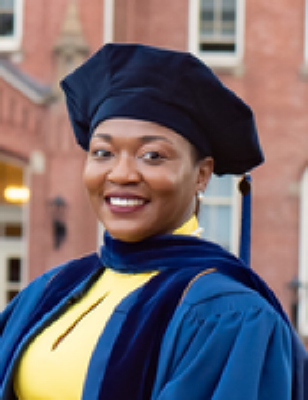